Outbreak appears to have begun in 2016.

As of March 9, 2020, 36 people infected with the outbreak strain of Listeria monocytogenes have been reported from 17 states.  llnesses began on dates ranging from November 23, 2016 to December 13, 2019. Sun Hong Foods, Inc. has recalled enoki mushrooms due to potential contamination with Listeria monocytogenes bacteria and a link to the reported illnesses.

In addition to 30 hospitalizations, four deaths were reported in three states, California, Hawaii and New Jersey.  Six pregnant women becam ill and of these, two reported the loss of the fetus.

Health officials collected samples of sickened people from November 23, 2016 to December 13, 2019.  Those ill range in age from 1 to 97, with the median age being 67.  Women who became ill represent fifty eight percent of the reported cases.

People infected with the outbreak strain of Listeria monocytogenes, by state of residence, as of March 9, 2020 (n=36) 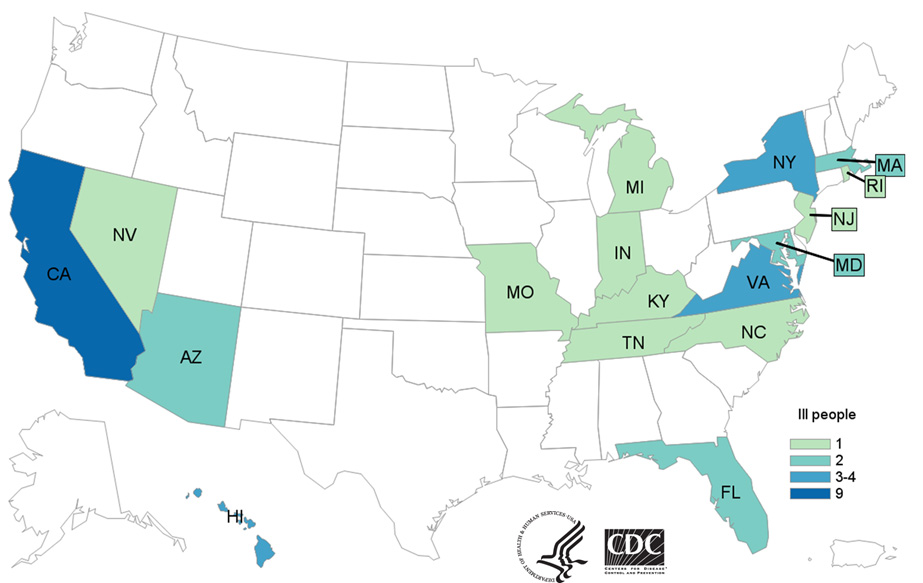 The number of ill people in each state is as follows:

The Sun Hong Foods enoki mushrooms are labeled "Product of Korea". Epidemiological and laboratory tests have shown that they are likely the source of this Listeria monocytogenes outbreak.  As the CDC continues to investigate this outbreak more updates will become available.

Symptoms of Listeria monocytogenes usually begin one to four weeks after eating the contaminated food.  However, those who become ill have reported symptoms as early as one to seventy days after consuming the tainted food.

What are symptoms of Listeria monocytogenes?

What are the symptoms if the infection spreads to the nervous system?

Pregnant women experience mild, flu-like symptoms. However, Listeria infection during pregnancy can lead to miscarriage, infection of the newborn, or stillbirth.

If you or a family member became ill with a Listeria infection, after consuming food and you’re interested in pursuing a legal claim, contact the Marler Clark Listeria attorneys for a free case evaluation.